How to Get the Best Crawfish in Houston! 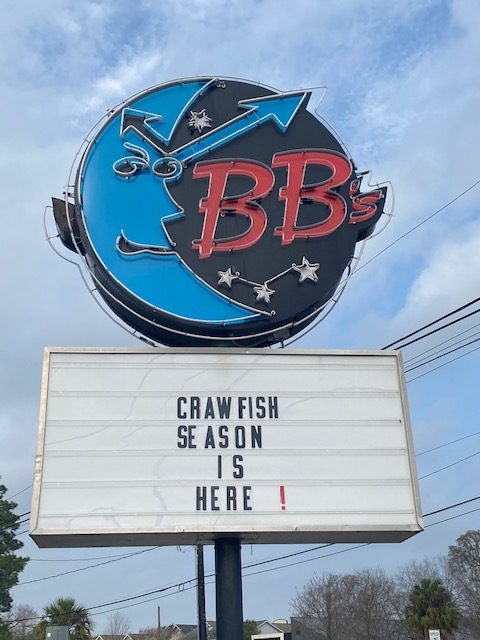 Crawfish season in Houston is in full swing and BB’s Tex-Orleans has not only prepared for it but we have perfected it! A lot goes in the preparations of having a seamless season in and luckily for us we have Brandon Wingate, General Manager of BB’s Tex- Orleans’ Heights location to give us the low down on all things having to do with crawfish sales and why this year is so unique.

As an operator, what are the challenges of an early crawfish season?
The challenges of selling early season crawfish as an operator are, that the crawfish is not the highest quality. Typically, the size is smaller. The type of crawfish that we’re getting from Louisiana are about to go through a molting period so, soft shells and low quality is very common. The problem with that is, the excitement building up to crawfish season amongst our Houston customer base is just building through the fourth quarter of the previous year. Impatience really sets in and people just want to eat their crawfish. Come in on January and even though it’s not time, it’s not prime eating, they come in, they want to eat the crawfish. Some are disappointed, just because the quality of crawfish that’s available at the time, it’s just not up to par yet. So that is a challenge. Just dealing with the disappointment, especially with the huge buildup the previous three to four months.

How does selling crawfish affect your staffing levels and what challenges does that present to operations?
Selling crawfish definitely affects BB’s Tex-Orleans staffing levels in the sense that they all have to dramatically increase. Not only do the current positions have to be increased, but new positions have to be staffed. For example, in what we like to call our ‘down season’, we don’t necessarily use hosts and maybe full-time to go servers, multiple dishwashers, people who their sole job is to squeegee a floor, to reset tables. Everything just multiplies, sometimes four-fold.

What percentage would you say that would be?
Our staffing levels increase by 250%. A restaurant that’s staffed with 50 servers in our off season would probably grow that staff to be at least 175 peak season.

Can you explain the various types of crawfish eaters and their patterns of eating crawfish?
There’s a bunch of them. There’s not necessarily a spectrum. You have people from Louisiana, who grew up eating backyard boils. Their way or their family’s way is THE WAY. For people who expect a certain Louisiana family Cajun boil, we have catered to that with the Louisiana way of crawfish. What makes us so unique is the Tex-Orleans style, which is really a hybrid of everyone’s way. When The Louisiana boilers come to BB’s to try the Tex-Orleans Way and they are a little bit shocked. Most of the time they’re excited, impressed and enjoy it.
There’s some other crawfish eaters out there that they’re conversely, just like people are big out Louisiana way crawfish eaters, there’s people who are Tex-Orleans way eaters. They build a budget through the off season. They save up money. It’s not cheap stuff. They bust out the crawfish budget when it’s time to come eat BB’s crawfish. They will be in here three, four, five times a week, really just chowing down and eating our bugs.
There are people that come  right at five o’clock after work. They write it in on their personal schedule in their planner. Some people that just get it to go. There are some people that like to make their own dipping sauce. They routinely ask for mayonnaise, ketchup and fresh lemons. There isn’t just one, type of crawfish eaters. There are hundreds of them. Everyone’s a crawfish eater in their own unique way.

How many pounds per year would you say your best customer eats?
That’s hard, because we have customers from all over Houston that come in here that probably eat four, maybe five times a week, and they’ll purchase 10 pounds for themselves. So it’s very common to see people come in and put down 50 pounds a week. So for a year, that’s over almost a thousand pounds, over the course of a crawfish season.

How much more expensive, percentage wise, did the crawfish start out this year compared to last?
This year we are paying 55% more than we were paying last year.

Can you tell us about your most difficult day as an operator during crawfish season and how that may have looked?
All of our restaurants in Houston experience what I’ve recently come to coin as the ‘wake-up shift’. It’s the ‘wake up shift’ that says the new business level is here. But what happens is, you just have a huge influx of volume that catches you on your heels and not your toes. You might have known that it was coming, but you didn’t think it was going to come that soon. It always happens on a typically slower day, like a Monday, Tuesday, or Thursday. It always happens within usually the first week of our crawfish season, sometimes two weeks and it always happens at night. It just ends up being a staffing issue. You’re understaffed for that shift but we probably have enough crawfish though.

How do you feel about early crawfish season? And it normally means you have to sell small crawfish?
I like it. It sets the bar of expectations pretty low so it’s cool to get the majority of your customer base and your staff to understand it only gets better from here. Obviously, it also brings in about 80% of the people who just want to eat crawfish, they don’t care what the quality is. That’s additional revenue for us as well, but we get to get people in to come experience our Tex-Orleans experience, which is just awesome party atmosphere.

So why can you successfully sell small, inexpensive crawfish early in the season?
We can sell them now because the demand in Houston is so high. Our customer base, October, November, December from the year before, the level of excitement and the addiction for crawfish is building. Once the turn of the new year hits, it’s crawfish season in their minds and they want it.

We get a lot of people from all over Houston, Texas that love the BB’s Tex-Orleans experience and a lot of crawfish addicts.  There are crawfish addicts who don’t care about the size, quality or price. They want to sit down, drink some beer, get some crawfish, start peeling, have a good time with their friends and family and enjoy themselves.

Are there specific months you should eat crawfish or can you eat crawfish all year around?
You definitely want to indulge yourself in March and April. Around Easter is when it really is probably peak crawfish quality, but probably in middle of March is when our business level is at its peak. You don’t want to eat your crawfish year around in the colder months, you’re probably eating frozen crawfish or just crawfish that’s old. It’s not going to be high quality, but I think you should eat them definitely during February, March and April.

What is the actual crawfish season and what is considered early to start selling?
Right now, it is early to start selling in Houston. Typically, the start of the season has the lowest quality crawfish and the most expensive crawfish. For this reason, a lot of vendors out there historically have waited. They usually wait until February, maybe Mardi Gras to start selling crawfish, but I’d say over the last five years in the Houston market, the demand is too high to wait that long. Whenever it’s available, it doesn’t matter what the price or quality is, you have to start selling it. And actual crawfish season is typically Lent. So, Mardi Gras, which is Fat Tuesday, the Wednesday after through Easter, that’s typically crawfish season. The real crawfish fanatics out there will say April to May is the real season, but you can really get the high-quality bugs in February and March.

So why are spring and summer considered the best times to sell any crawfish?
Weather. That’s the best weather of the year for crawfish, especially in Southern United States like Texas and Louisiana. Along the Gulf, we received some nasty weather for August and September. It’s usually hot and muggy. It does start to cool down in October, November, December. January is typically cold as well, but the spring time in Southern Texas and Louisiana is just beautiful, 70 degrees and sunny all day. So the weather’s number one contributing factor to that. Summer, May and June will have their hot days, but they will also have their fair share of 70-degree days, which are just great for crawfish eating.

What month does the season end for BB’s usually?
I’ve seen it end as early as late June. But I’ve also seen it as recently last year ago, it was September. So usually, I would say beginning of August is when BB’s start questioning, is the demand still there? If it’s still a top product mix or top selling item on our menu, then we’ll continue to sell it. But typically, that goes down around August.

Well there you have it, y’all! When it comes to crawfish season, BB’s Tex-Orleans is a well-oiled crawfish machine ready to serve you the best Crawfish in Houston, TX. Crawfish is being sold at all ten-locations. Bring you and your krewe to enjoy throughout the season.