Mardi Gras in Houston 2021: You Can Snow on Our Parade But We’re Still Going to Party! 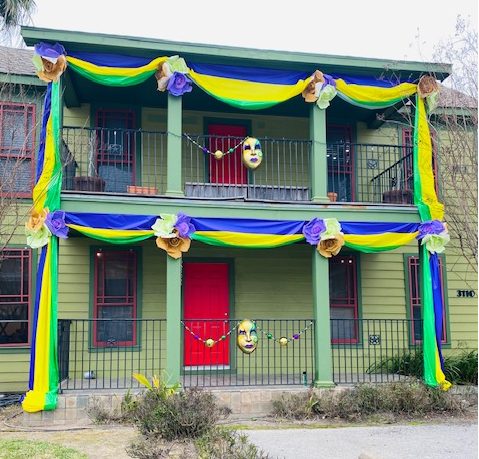 Our favorite holiday is here y’all, MARDI GRAS! February 16th is officially Fat Tuesday, Houston. For those Houstonians who don’t have the Cajun blood running through you, you may be wondering what Mardi Gras is all about, where did it come from, what can we do this year, and why would anyone call a holiday “Fat”? (Ahem RUDE!) Let’s get to the bottom of it!

Mardi Gras’ origins extend as far back as medieval Europe spreading throughout Rome and Venice in the 17th century and then to the French House of the Bourbons in the 18th century. It was a time when Christians would have one last great carnivorous meal before the start of the 40-day meat fasting Lenten season started on Ash Wednesday. This day of feasting became known as Mardi Gras, or Fat Tuesday. This evolved into a tradition called “Boeuf Gras” (Fatted Calf), in the French colonies. In March of 1699, a French-Canadian explorer by the name of Jean Baptiste Le Moyne Sieur de Bienville set sail to the Americas and on the eve of the festival he founded a small settlement 60 miles south of New Orleans and named it “Pointe du Mardi Gras”. Four years later, he founded Fort Louis De La Mobile, now known as Mobile, and so, he started the first American Mardi Gras. The next year, Mobile established a secret society, called the Masque de le Mobile and the first Krewe was born- it lasted for 5 years. Bienville then went on to established New Orleans, busy man! In 1710 the “Boeuf Gras Society” was formed and developed parades which lasted for 150 years using huge bull heads on wheels pushed by up to 16 men. Later on, a new parade named ‘Rex,’ which is still in existence today, would parade with an actual bull donned in white symbolizing the beginning of upcoming religious holiday.

In the 1740’s, the Governor of Louisiana was the first to establish elegant societal balls, which take place in NOLA still to this day. The late 1830s came and started the popular street processions of maskers with carriages and riders on horseback  to celebrate the carnival.  Gaslight torches, or flambeux were carried to light up the way and give an air of excitement. The colorful and enchanting floats, then called tableaux cars, came about in 1856 after six Mobile natives founded Mistick Krewe of Comus. This krewe added magic and mystery by having masked balls and remaining anonymous on their floats. A second krewe called the Twelfth Night Revelers was formed in 1870 and gave us our first account of Mardi Gras throws. These were inexpensive glass beads which you had to catch before they fell and broke on the ground. Sounds dangerous!

In 1872, The first King of Carnival was introduced when Russian Grand Duke Alexei Romanoff visited. A group of businessmen honored the royal with the Romanoff family colors, purple for justice; gold for power; and green for faith, giving us our traditional Mardi Gras colors, we know and love today. The next year floats were made almost entirely in New Orleans and no longer France giving New Orleans the notoriety it has today of hosting the Mardi Gras. As you can see, it took centuries to arrive at the fabulous Mardi Gras we know and love today.

Unfortunately, this year NOLA Mardi Gras parades are cancelled due to government mandate. That doesn’t seem to be stopping the spirit though. Local New Orleans Columnist and Author, Chris Rose writes “Mardi Gras is the love of life. It is the harmonic convergence of our food, our music, our creativity, our eccentricity, our neighborhoods, and our joy of living. All at once.” You can rain on our parade but we’re still going to party! Plenty of locals are taking Mardi Gras into their own hands making Float Houses. This movement consists of decorating houses using the traditional float décor allowing a safe social distance viewing. You can find these all-over New Orleans, parts of Houston and various parts all over America. Participants are calling themselves the Krewe of House Floats. We hope the same passion and creativity lasts well past any pandemic.

What a fascinating and rich history, no wonder it’s the most wonderful time of year! Well, that and crawfish season of course! Well Houston, a pandemic, a snow-pocalypse and fifty percent capacity won’t hold us back from celebrating Mardi Gras with you though. We so hoped to have our Fat Tuesday celebration with all of you this year as it is always such a fun gathering to celebrate the rich and colorful history of such a unique holiday but our first priority is keeping yours and our krewes safe. Tell us how you are celebrating at home by commenting on any of our social media pages.  Be safe and wear a mask!