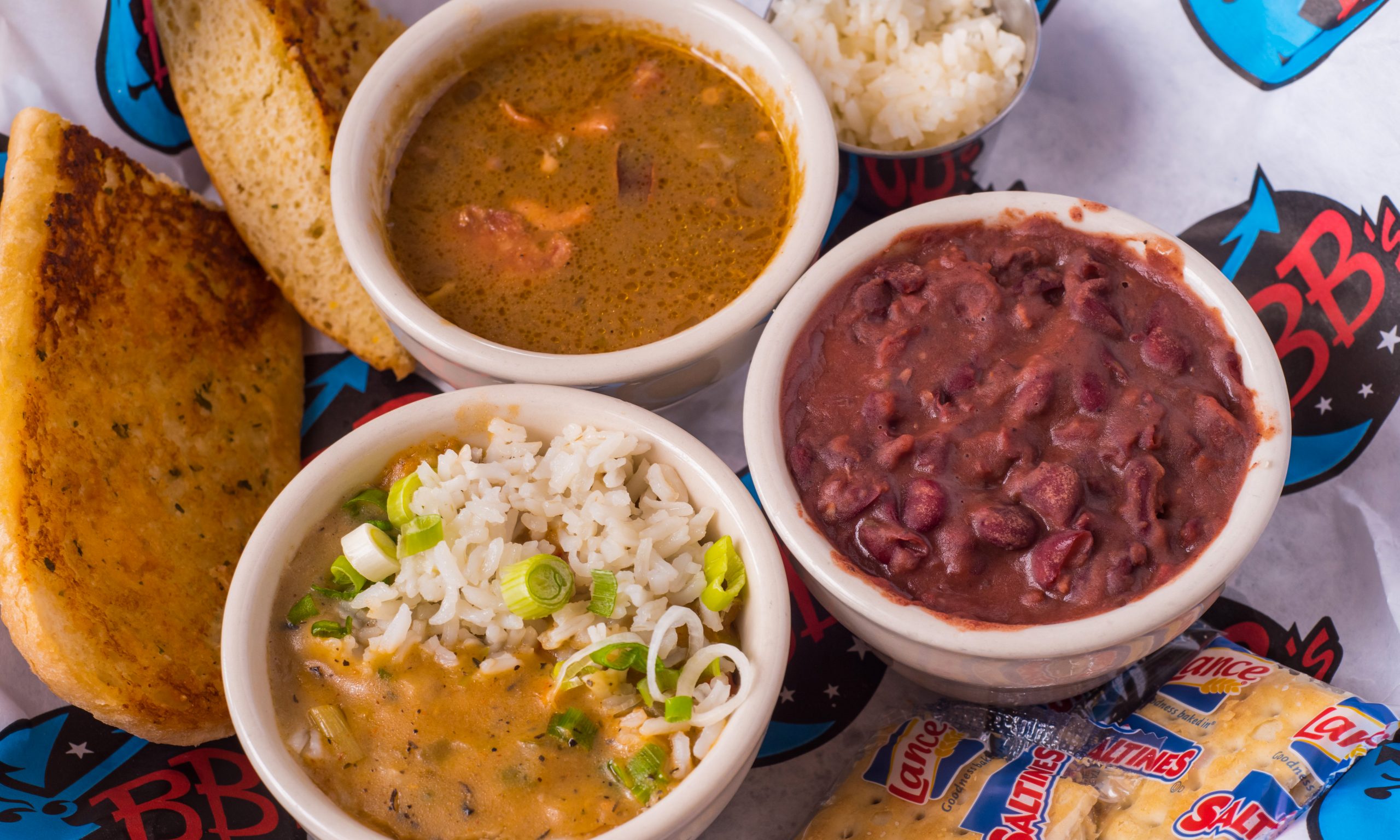 Cajun food in Houston is widely raved about. Why WOULDN’T it be when you have dishes like, po boys, dirty rice and crab cakes?! But have you ever gone to a Cajun restaurant chowed down on boudin and wondered, what makes Cajun food, Cajun? It’s common knowledge that it’s from our Louisiana neighbors but where did the Cajun flavors start and what makes it so darn delicious?! Like always, we got you and are happy to spread the Cajun knowledge.

Cajun foods’ delicious flavors manifested from the French heritage. The story begins around four hundred years ago in 1600 with the French citizens of Vendee, a rural area of western France migrated to modern day Nova Scotia, Canada to the town of Acadie, giving them the name Acadians. These French settlers brought over their French cooking know-how and became farmers and fishers living off the local resources. Over one hundred and fifty years later on July, 28th, 1755, the Nova Scotia Council decided to deport all the Acadians who refused to sign an Oath of Allegiance to Britain. Upwards of ten-thousand Acadians were exiled throughout America including the coast lines of Louisiana, giving it the term Acadiana to the region. Once again, they settled in using their French cooking techniques and gathered what they could from land and gulf to make what we now know to be our beloved Cajun cookin’.

They said “Au Revoir” to the Canadian potatoes and cod and said “Hello, cha!” to the bayous rice, shrimp and crawfish! New spices like dried black pepper, parsley, bay leaf, file and cayenne were introduced to local kitchens. Southern sun grown produce like green onions and bell peppers and were substituted for rooted vegetables like carrots. Bell peppers combined with celery and onion make a basis for most Cajun and Creole dishes. This combination is what the Cajuns lovingly termed as the “Holy Trinity”.

You may have seen a few signs in our restaurants that say “first you make a roux!” It’s true, and all good things come to those who make a good roux! It’s a cornerstone of Louisiana cooking and the base for gumbos and etouffees. A Cajun roux is equal parts flour and butter cooked on a low flame until it smells like Maw Maws house.  The Creole cuisine is also known for their rouxs as well, although they use oil or lard with their flour.

Creole cooking is sort of the posh cousin of Cajun cooking, getting their start in New Orleans proper.  Both Cajun and Creole cooking have similar characteristics such as starting with a roux and using the “Holy Trinity”, rice and various seafoods. A differentiating factor is their use of tomatoes in their sauces. We have them to thank for Creole dishes like catfish courtbouillon, shrimp creole and grits and grillades.

Now, if you’ve ever enjoyed finger lickin’, hot and spicy boiled crawfish or shrimp which most of us have, you have the Cajuns to thank for that! I’m not sure who the first person to think picking up a couple pounds of “bugs” on the swamp floor, boiling it with spices, sucking the heads and eating the tails is, but if I ever find out, remind me to build a statue in their honor! This outlandish and delicious idea has swept over parts of the Gulf Coast making it the most well-known Cajun delicacy. Over the years we’ve added  fixins like andouille sausage, corn, potatoes, mushrooms even green beans to create our beloved crawfish boils what they are today.

The Cajuns will forever be some of BB’s heroes! Now, we’ve taken these mudbugs, shrimp and andouille sausage and made Cajun dishes out of them like, crawfish etouffee, jambalaya and gumbo. If you’re a BB’s lover you’ll already know we’ve taken them it another step farther and added a Texas twist and created dishes like Cajun empanadas and boudin flautas.

The style of Cajun cooking has evolved over time too. Yes Houston, you’re accustomed to a good barbeque, and you’ve probably had grilled shrimp. But when you cross that state line barbeque shrimp takes on a whole new meaning. It’s shrimp sauteed in worcestershire- spiked butter sauce over a low and slow heat. Are you drooling yet? Charbroiling is a common practice as well.  This is my personal favorite way of preparing oysters, consisting of grilling shucked oysters on the half shell on a rack over hot charcoals. Smothering is prevalent in the Cajun culture as a way of making dishes like etouffees. It’s the practice of cooking veggies or meat on a low heat with a small amount of water, similar to braising. Now here is one we’ve definitely heard of, deep frying! Yes, okay okay, you can get fried food everywhere but it ain’t Thanksgiving in Louisiana without a deep fried turkey! This practice has actually entered the Cajun cuisine more recently and is offered at any of our ten restaurants around Thanksgiving and Christmas time. It is up for debate whether we want to consider Blackening to be a true Cajun cooking process. Louisiana’s  Cajun and Creole celebrity chef Paul Prudhomme invented the seasoning mixture in the 1970’s. It was quickly associated with Cajun cuisines but it doesn’t span back to the early days. What do you think, should we claim it?

As you see the Cajun cuisine has a history as rich as their roux. The Cajun cuisine is the cornerstone in which BB’s was built. So, the next time you stop into your local BB’s, and order the fried shrimp, RUE trio (crawfish etouffee, gumbo and red beans and rice), boudin balls or a pound of extra wet crawfish, you’ll have to smile and thank Maw-Maw’s Maw-Maw for the Best Cajun Food in Houston.