Houston’s Best Bar is Getting Better! 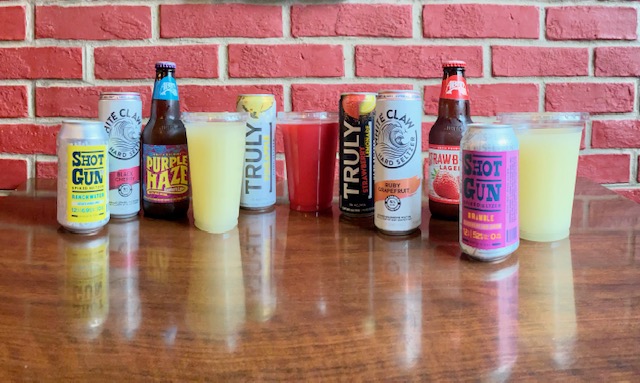 Can you believe we are STILL in quarantine? Me either! Thankfully, BB’s Tex-Orleans is making your lives a little bit better with the additional beverages on the to go menu. Let’s see what Alyssa Ryde, lead bartender at our Heights location has to say about the Big Beverage Bang going on right now.

I’ve heard BB’s has new seltzers. Can you tell us a little bit about the flavors?
We actually have six new seltzers. We’ve got Truly Pineapple and Truly Strawberry Lemonade. We’ve got the White Claw Ruby Grapefruit and White Claw Black Cherry. My favorites are the Shotgun seltzers. We have their Bramble flavor, which is a blackberry and lemon and the Ranch Water, which is a lime and agave flavor- that one’s actually 6.9 ABV.

You’ve recently changed your to go drink menu. Can you tell us a little bit about the differences?
It has changed a bit because now we offer our 6 new seltzers and our Frozen TO GO cocktails including, Red Headed Wompus Cat, Mango Rita, Raspberry Rita, Abita Rita and the Texas Twister.

Why did the price increase on the to go frozens?
You’re actually getting more in the to go cup than you are when you’re dining in. Our dine in glass is 12 ounces while the to go is 20 ounces.

How has the bar changed since BB’s went down to 50% capacity?
It hasn’t been as busy and the drink menu has been trimmed a bit, but we’re still making the cocktails everyone loves. We’re so excited that crawfish is back because now it’s time for our awesome crawfish customers to come back for a while. We really missed them.

Are people ordering as many alcoholic beverages since we’ve lost capacity?
I feel like people aren’t drinking any LESS than before. We just can’t serve as many people at a time as we could before the pandemic, but we still make lots of drinks and the numbers keep going up the deeper we get into the crawfish season.

What changes behind the bar have you made to account for less people coming in?
We haven’t had to change too much, but we’ve definitely stopped ordering as much alcohol for awhile. Now that crawfish is back though, our orders have begun to grow quite a bit. I expect my orders are going to continue to grow a lot larger this year.

What’s your favorite part about being a bartender?
I, honestly, just enjoy making delicious and eye-catching drinks. I enjoy the fast pace and there always being something to do. Most of all, I love the relationships that I make with my coworkers and the amazing regulars.

Can you tell us about the BB’s margaritas and why they’re so good?
Our margaritas are made with only fresh juices and they are really tart and delicious. The rocks version is also a skinny margarita because we use a small amount of agave instead of using sugar.

What’s up with the hurricane being called the ‘Redheaded Wompus Cat’?
If you’ve ever been to BB’s you’ll have seen the giant framed picture of Maw maw.  This lovely lady, earned the nickname when she played on a school basketball team and people described her style on the court as being like a ‘Red-Headed Wompus Cat’.

What brew is the most popular at this location?
Mainly domestics and light beers. During crawfish season, the highest selling beer is probably going to be Michelob Ultra, Bud Light or Dos Equis, but we do sell a lot of Corona and Modelo.

So what’s the highest selling draft beer at BB’s?
Dos Equis and Michelob ultra, for sure.

What beer do you think pairs best with Mudbugs?
Any light beers, that’s why we sell so many of our domestics during crawfish season. Me, personally, I really like the new Shotgun Ranch Water seltzer. It’s just really light and refreshing and it also packs a punch with that higher ABV as well.

What would you say the most popular Tex-Orleans cocktail is? And what’s in that drink?
Probably our margarita. We go through so many frozen margarita and the different variations of it. We use it for the AbitaRita’s. We have it in our Texas Twisters and Raspberry Rita’s, Mango Rita’s. We go through so much frozen margarita. It’s tequila and orange liqueur, lime juice, lemon juice, orange juice, and simple syrup, sugar.

The seltzer craze has grown in popularity everywhere. The Trulys and White Claws especially have grown in demand around town. How have customers reacted to BB’s carrying numerous seltzer options?
I think everyone has been really excited about it. We’ve been selling quite a bit of the Shotguns, mainly the Ranch Water, but both of them have been moving. We’ve sold quite a few of the White Claw Black Cherry flavored as well, but they’re all moving and everyone’s really excited to have a good selection of seltzers on the menu.

Have you seen excitement grow here at BB’s Tex-Orleans Heights and location wide about our capabilities to sell more alcohol to go like our frozen cocktails?
Absolutely. I definitely think people are excited that they can finally take our frozen drinks to go. We used to have so many people asking about it all the time and we didn’t like having to turn them down. Now, since we have the capability to sell them, they’re moving really well and people really like them and everyone’s really receptive to it.

Why do you think it’s been such a draw to be able to add alcohol to your order online and has that process gone smoothly during the pandemic?
I think it has. I don’t think that it’s much different than if they were dining in and I was just making the drinks for regular tickets. Only thing is I don’t open these or I make sure that they go out still sealed. But I do think that people are really happy that they are able to get drinks to go, because before the pandemic happened nobody could take drinks to go anywhere unless you’re buying it from a liquor store or the grocery store or something like that. But being able to come and get food to go and take it home with you and also get your alcohol at the same time, I think it was a huge draw because it makes it an easy one-stop for people and they don’t have to go by the grocery store as well as pick up their food and their food get cold or things like that.

WOW! Larger and MORE beverages you can drink from your own home WITH TO GO CRAWFISH!? Yes, please! This Big Beverage Bang really is revolutionary!